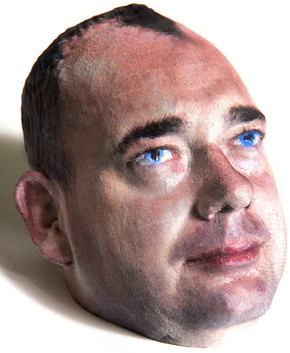 There are more than a dozen sorts of three-dimensional (3D) printer. They all build up objects, layer by layer, but what the layers are made of varies from one to another. Some extrude filaments of molten plastic. Some spray special “inks”, such as liquid polymers that solidify when exposed to ultraviolet light. Some use powdered plastic or powdered metal that is then fixed in place with a laser or an electron beam. Now there is yet another way. Staples, an office-supplies company, has introduced it at its store in Almere in the Netherlands. And the layers their machine prints are made of a substance that Staples has in abundance: A4 sheets of paper.

The process was invented by Conor MacCormack, an Irish aerospace engineer, and his brother Fintan, an electrical engineer. They worked with 3D printers but found the materials expensive. (Many manufacturers put a high markup on their bespoke printing materials, just as the producers of 2D printers do on their ink.) The MacCormacks therefore set out to make a full-colour 3D printer with exceptionally low operating costs. They call the result “Selective Deposition Lamination” (SDL) and they reckon the cost of the paper needed for it works out at about 5% of the cost of the materials for other 3D systems.

Like those other systems, SDL begins by taking a series of digital slices through the object to be replicated. These are then sent to the printer, which reproduces each layer in turn. In the case of SDL, the process starts by the machine applying drops of adhesive to a sheet of paper. More adhesive is applied to the area which will form the first layer of the object; less (but still some) is applied elsewhere. The lightly glued area acts as a support while the structure is built up.